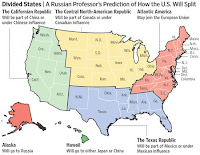 Now, I don't want to be a buzz kill as you pop the bubbly for New Year's, but it's hard not to imagine this time next year without wondering what changes in the world and in the US will take place in 2009. There is no doubt it will be an interesting year. Have you heard that the United States is going to fall next year, yes our very own balkanization? Russian academic Igor Panarin just said so. According to his theory reported in the Wall Street Journal, here's how it will go down. Mass immigration, economic decline, and moral degradation will trigger a civil war. Then the dollar will collapse, and the United States will splinter into six separate unions, with Alaska (and presumably Governor Sarah Palin) falling under Russian control...worried yet? Of course, Panarin is a former KGB analyst, so if you're like me, you're thinking...this theory is jibberish. However, I love the effort to plant the theory in hopes it goes viral and drives us all deep into self-defeat and madness, as if our own media doesn't try to accomplish that very thing everyday. Head games were so much fun during the Cold War, why not bring them back? Nonetheless, an intersting read.
Happy New Year, comrades!
Posted by Sarah Engel